Despite being Italian, very Italian indeed, it took France to find him out. The occasion was the Recanati Festival, which Gianmaria won for the first time in '93 and then again in '94: on that occasion a French producer, Nicole Courtois, noticed him and began to deal with him. From that moment on a lot of things have happened: eight albums - Montgolfières (1995), Extra-Muros (1996), Lampo (1999), Il valzer di un giorno (2000), Altre Latidudini (2003) and then, with the producer Paola Farinetti, Da questa parte del mare (2006, TARGA TENCO 2007 as “Best Album of the Year”.), the live album SOLO - dal vivo (2009), Vitamia (2011) and Men at work (2013); more than 4000 concerts in France, Italy, Germany, Austria, Belgium, Canada, the United States, Portugal, four sold out concerts at L’Olympia in Paris and a long series of homage articles in the main newspapers ("Le Monde" in the lead). 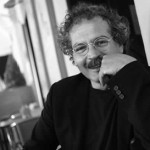 Furthermore, Gianmaria Testa’s activity in the publishing field is manifold. The audiobook Ninna Nanna dei Sogni was published at the end of 2012 by Gallucci Editore: it was his first experience in world of childhood - a lullaby for children illustrated by the beautiful drawings of Altan, the creator of Pimpa.

This was followed by two other children audiobooks published by Gallucci: 20.000 Leghe (in fondo al mare), illustrated by Marco Lorenzetti (May 2013) and Biancaluna, illustrated once again by Altan (May 2014) and the volume Il sentiero e altre filastrocche (October 2015), a collection of nursery rhymes written to be read and not to be sung. Gianmaria’s “Filastrocche” (nursery rhymes) are not only for children, but also for adults, actually for everyone. The verses are completed by the drawings - or rather the artworks - of Valerio Berruti, an international artist, a lifelong friend of Gianmaria.

Furthermore, the book Come il vento fra i salici was published posthumously, in 2016, again by Gallucci editore: a complex project that combines visual art (Valerio Berruti) , literature (The wind in the willow by Kenneth Grahame, translated into Italian by Beppe Fenoglio) and music (Gianmaria Testa) . 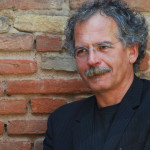 On April 19 - 2016, posthumous as well, the book Da questa parte del mare was released by Einaudi with a preface by Erri De Luca. The book is the story of the thoughts, stories, situations that contributed to giving life to each of the songs on the album of the same name, and it is inevitably also the story of Gianmaria himself and his roots. Gianmaria's gift is to be able to tell these stories without demagogy, sometimes with lightness, other times with reflective depth.

This little and very intense book is a moving journey, through stories and songs, into human migrations. The book was followed, in 2017 (and then on tour for many seasons) by a theatrical play of the same title, performeded by Giuseppe Cederna, another friend of Gianmaria, produced by Produzioni Fuorivia and by Fondazione Teatro Stabile di Torino and directed by Giorgio Gallione.

Moreover, in 2017 two box sets with the complete work of Gianmaria Testa were released all over the world: a box entitled En Studio - containing 7 CDs, the works recorded in studio - Live & Altro, containing 4 CDs dedicated to live recordings and a jazz tribute to Léo Ferré.

In 2019, on January 18, almost three years after his death, the new album Prezioso was posthumously released: a collection of unreleased tracks by Gianmaria Testa, produced by Paola Farinetti for Produzioni Fuorivia and distributed by Egea Music.

Prezioso consists of eleven songs recorded mostly in the form of sound notes for voice and guitar. Intimate tracks born in a room at home and imagined for future albums or for other artists who often asked for Gianmaria’s collaboration.

Prezioso is the result of a refined work in the recording studio (carried out by Paola Farinetti and the sound engineer Roberto Barillari) and required a considerable post-production effort to enhance and highlight the authenticity and purity of the latest Gianmaria’s interpretations, while maintaining the intensity and emotion of those moments so intimate, exciting and powerful in which the seeds of a new song were planted for the very first time.

Finally, thanks to the collaboration between Produzioni Fuorivia and Egea Music, a new series was born starting from October 17, 2020, exactly on Gianmaria Testa's birthday: a new very accurate edition, both on CD and vinyl, of all Gianmaria's albums recorded in studio, from the first one - Montgolfières (1995) - to the last one - Vitamia (2011) - many of which over the years have become extremely rare.

Gianmaria was a deeply popular and refined songwriter and singer at the same time, with a hoarse and velvety voice, who made the naked song his true strength. His texts are like small poems that speak of mists and encounters, of solitude and hills, of love and migrants, and music that evokes tango, jazz, bossanova, habanera, waltz and create warm and intense suggestions. His singing of images and feelings is simple, popular, traditional, true and therefore winning, it goes beyond trivial comparisons and easy combinations and is deposited directly in the heart and soul of the listener.